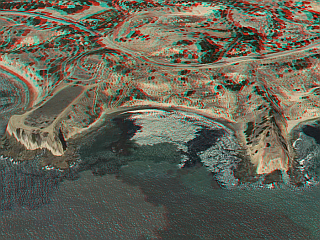 I did not actually take an aerial photo of Portuguese Bend to get this 3D image, although it would be possible from a moving aircraft. Rather, I made it from a pair of screen captures using Google Earth to view the terrain along the southern coast of the Palos Verdes Peninsula. I took each captured image from a slightly different vantage point by moving the image laterally.

I think this image gives a pretty good 3D relief map of the Portuguese Bend area (click image for larger view). If you don’t have your 3D Glasses, you can see the image in 2D here.

If you don’t have Google Earth, you should get it. You can do a lot more with it than making nerdy 3D images.

In the past, I made Google Earth 3D images of several other locations: