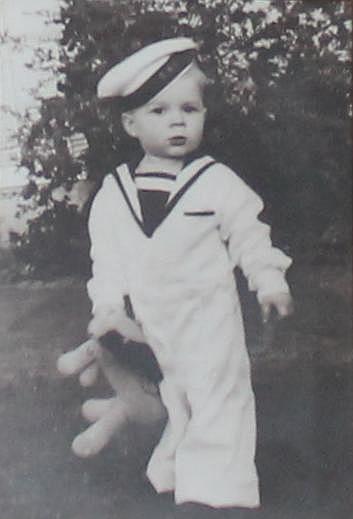 I cannot remember the day this photo was taken. My Mother dressed me up in a sailor suit and took my picture with her little Kodak Brownie camera on the front lawn of our Long Beach, California home. I think I was about a year and a half old at the time. I think the little stuffed animal I was holding was named “Buster” by my Dad after he returned from his World War 2 US Naval deployment to the Mediterranean in 1945.

Of course, I enlisted in the US Navy in 1960 at the age of seventeen. It was in the Naval Reserve and I did not go on active duty until 1962. I was released from active duty in June of 1965 and discharged from the Naval Reserve in 1966 after a three-year hitch with the discharge rate of third-class petty officer.

I went to Navy ‘A’ School in Memphis, Tennessee to be an avionics technician; after completion of school (I was first in my graduating class), I reported for duty to the U.S. Naval Missile Center, Point Mugu, California. When I first reported to the air station, I was assigned to a security infantry detail on the base – NEGDF (Naval Emergency Ground Defense Force). It was half intensive training and half security guard duty, complete with hard helmets, leggings and sidearms and M-1 Garand rifles.

After my security assignment was over, I was an air crew member, primarily as radar and radio operator for transport and patrol aircraft. I flew on missile test launch aircraft and also on other missions over the Pacific Missile Range. One mission transported a target remote operating platform to Holloman AFB, New Mexico in an old Douglas DC-4 (Navy R4D – Navy three seven two eight niner). When not on a mission, I worked in the avionics shop, maintaining the command’s aircraft communications and navigation gear.

I left active duty to work in aerospace and defense, but remained in the Inactive Naval Reserve until I was discharged.