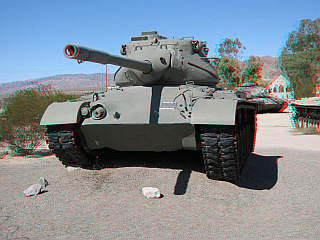 The following text may be seen at the WikiPedia article on the Patton Museum:

Exhibits include a large collection of tanks used in World War II and the Korean War, as well as memorabilia from Patton’s life and career, especially in regards to his service at the Desert Training Center and that of ordinary soldiers who trained there. Development of the Colorado River Aqueduct and natural science exhibits are displayed as well. In addition, a 26-minute video is shown, detailing Patton’s military service and the creation of the Desert Training Center.

Though Patton only spent less than four months at the Desert Training Center, his establishment of the training grounds directly impacted more than one million troops.

The museum is at the Chiriaco Summit exit off Interstate 10, 30 miles/48km east of Indio.

Image: Patton Tank in 3D – click to enlarge. If you don’t have your 3D glasses handy, you can see the 2D version here.