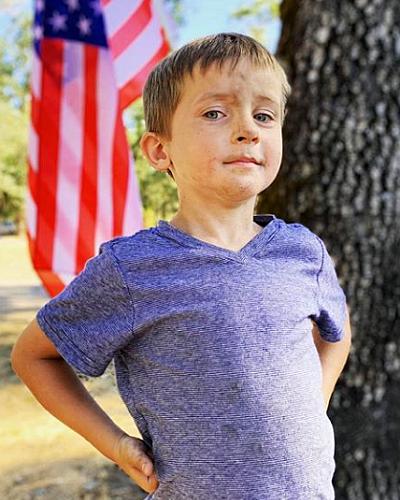 Today is the fifth anniversary of the birth of our eldest Great Grandchild and the first Great Grandson, Alex. Happy Fifth Birthday to Alex and many happy returns.

That’s a recent photo of Alex at the right, nearing his fifth birthday and like all boys that age showing some maturity (his pose) and some less mature dirt on his face, typical of most normal five year old boys. Alex, his cousin Maci and brother Mikey were on a park outing when this photo was taken.

The three kids I mentioned are our three great grandchildren aged 5, 3 and 2, respectively. The kids live in the Santa Rosa area of California with their mothers, our eldest two granddaughters.

As we watch these kids grow up at a seemingly accelerated pace, we realize that we are growing older at the same rate. We further realize that our youngest descendants are rapidly maturing to become parents themselves in years to come. We can only hope that we might still be around to see the beginning of that next generation