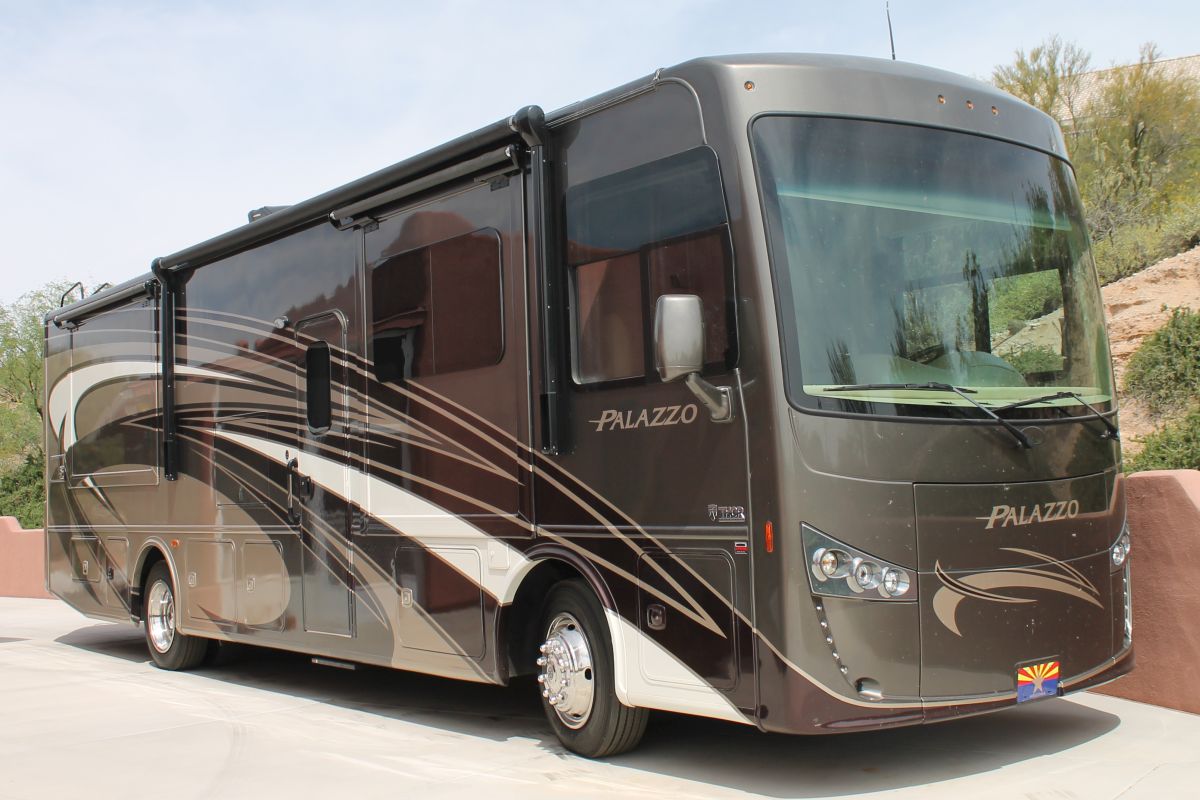 On this day, October 1, 2021, we’re celebrating our twelfth year of permanent retirement. I say permanent because this date is actually my second retirement, the first being ten years prior to 2009. To make a long story short, we retired rather than take a layoff in 1999 due to a manpower reduction. I immediately found another job at a competitive company to the one from which I had retired which eventually was acquired by my first company. Thus, I retired from the same company twice and now receive two pensions from them.

IMAGE: Thor Palazzo Motorhome ready to roll. Click on the image to enlarge.

In our retirement post last year, we mentioned hitting the road sometime in 2021, but that has not happened (yet). We did not go anywhere in the spring or summer in the big RV for various reasons, but the thinking now is to at least have a two or three-day excursion semi-local somewhere in Arizona. Since I am still healing up from hernia surgery, we need the surgeon’s go-ahead for that, but plan to get it done before it gets too cold for camping.

As far as keeping the RV ready for our next excursion, we have a routine where the engine gets started up and run for a while every week. We run the 6KW generator about once a month with a load, like both A/C units running. We currently have the black and gray tanks filled with a water-bleach solution which will be purged and prepared for use prior to our next run.

We’re thinking that our destination might be in the high desert north of the Mogollon Rim, perhaps Winslow, Holbrook, Homolovi SP and Petrified Forest NP. More on that when we make final plans.

So, join us in celebrating our twelfth AND twenty-second retirement anniversaries! 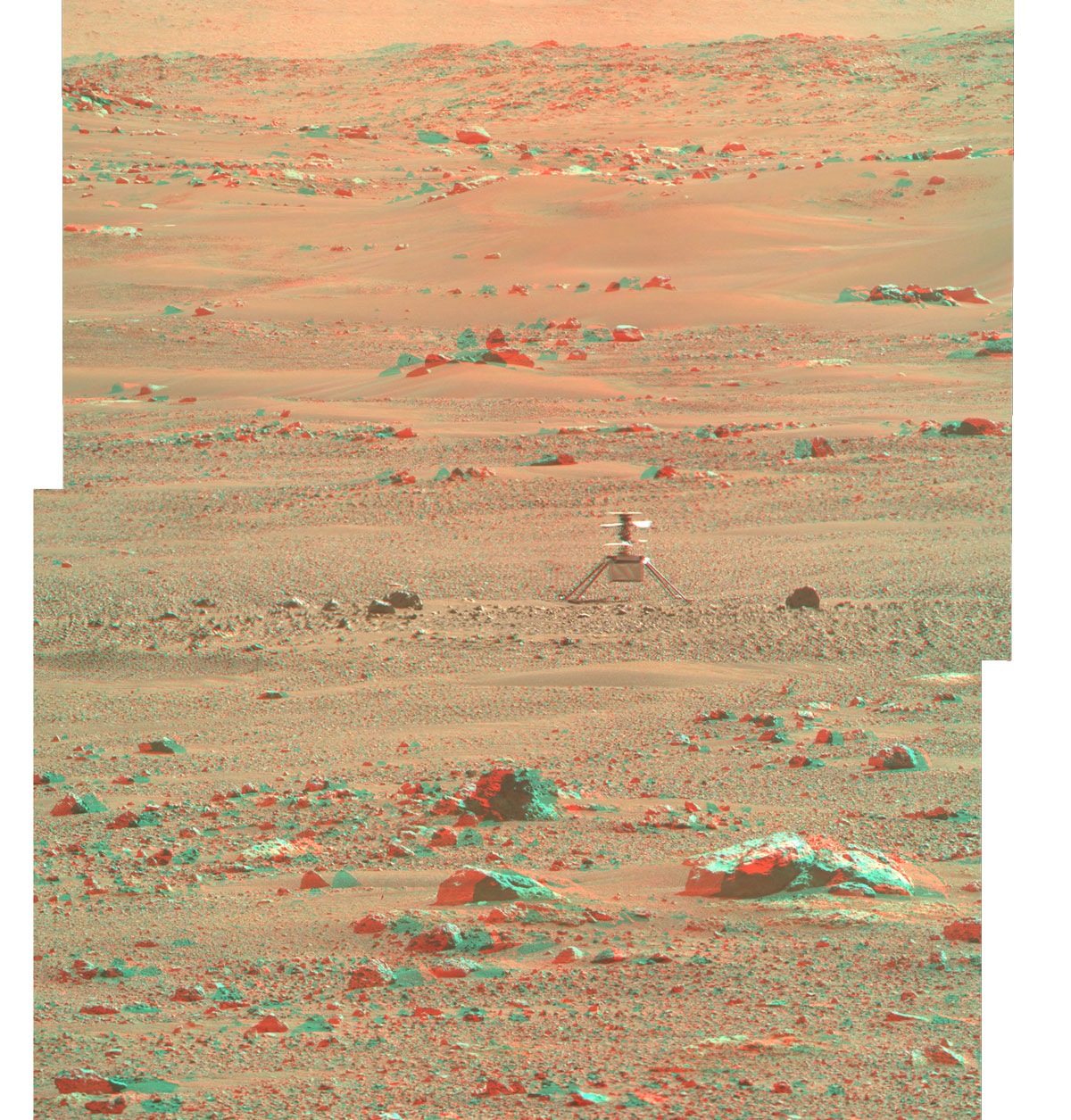 Another 3D photo from Mars: Ingenuity as seen from the Perseverance Rover on about June 21, 2021, Earth time. Click on the image to enlarge.

As of June 21, 2021, Ingenuity Mars Helicopter has successfully flown its 8th flight, traveling about 525 feet (160 meters) south-southeast from Airfield D to the new Airfield E! This marks the third flight in the Operations Demonstration Phase of Ingenuity, in which the team will continue to push the flight envelope of the aircraft while learning valuable operational lessons. Flight 8 was also the first flight the vehicle executed since performing an update of its Flight-Controller flight software and all telemetry indicates that the update was a success!

In the event that you do not have your 3D anaglyph red/cyan glasses handy, you can see the 2D photo here. 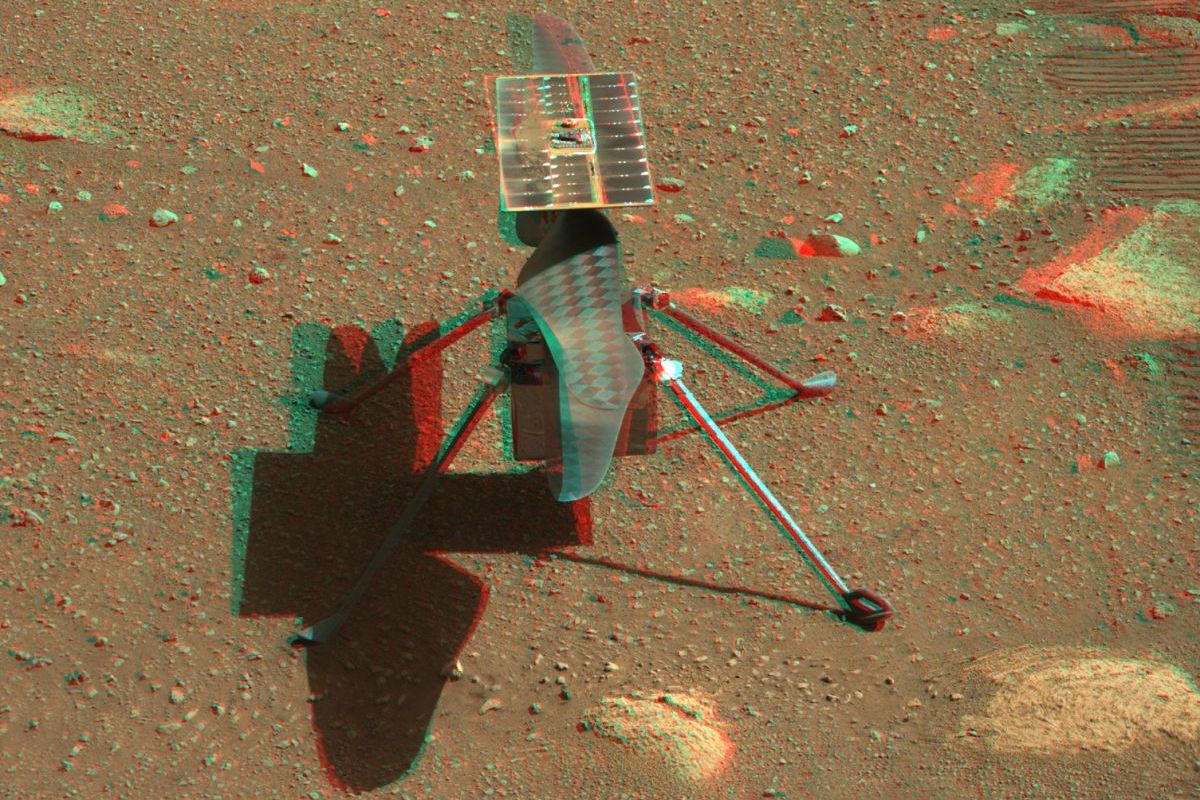 This is a 3D anaglyph photo of the Mars Helicopter, Ingenuity. The photo taken shortly after the Perseverance Mars rover deployed Ingenuity to the surface of the red planet. Photo courtesy of Astronomy Picture of the Day. Click on the image to enlarge.

In case you do not have a pair of red/cyan glasses (available at Rainbow Symphony) to view Ingenuity, you can see the 2D picture here. 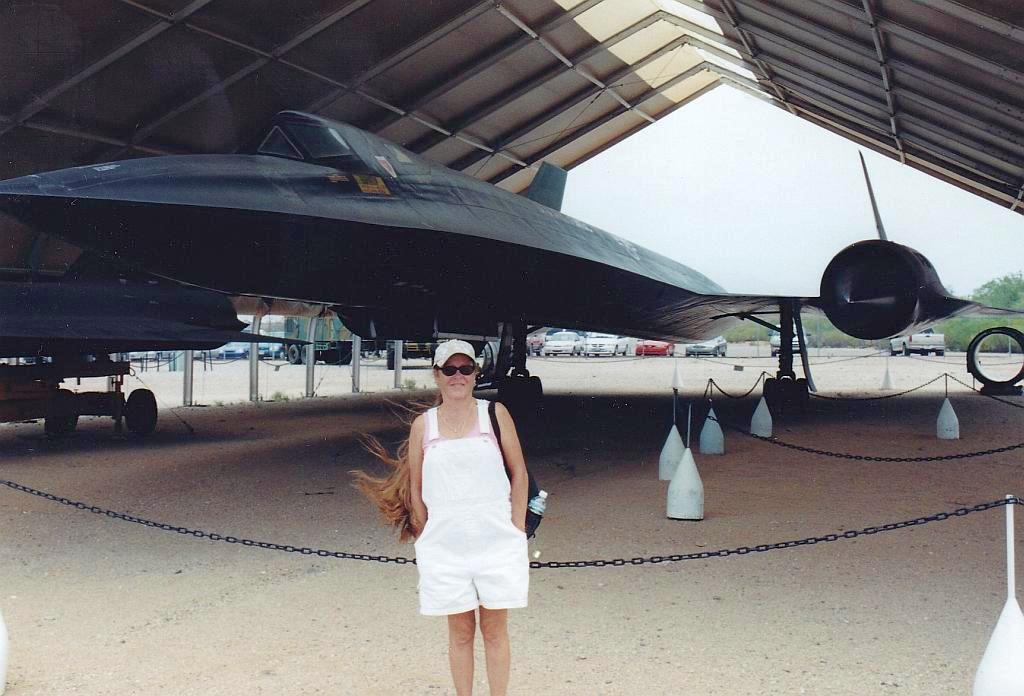 I took this photo of Verna posing with an SR71 at the Pima Air Museum near Tucson, AZ. I scanned in some images for throwback Thursday which made it onto the FecesBook® but missed this one on here a day late. The photo had to have been taken in the early 2000’s before we went digital. Click on the image to enlarge. 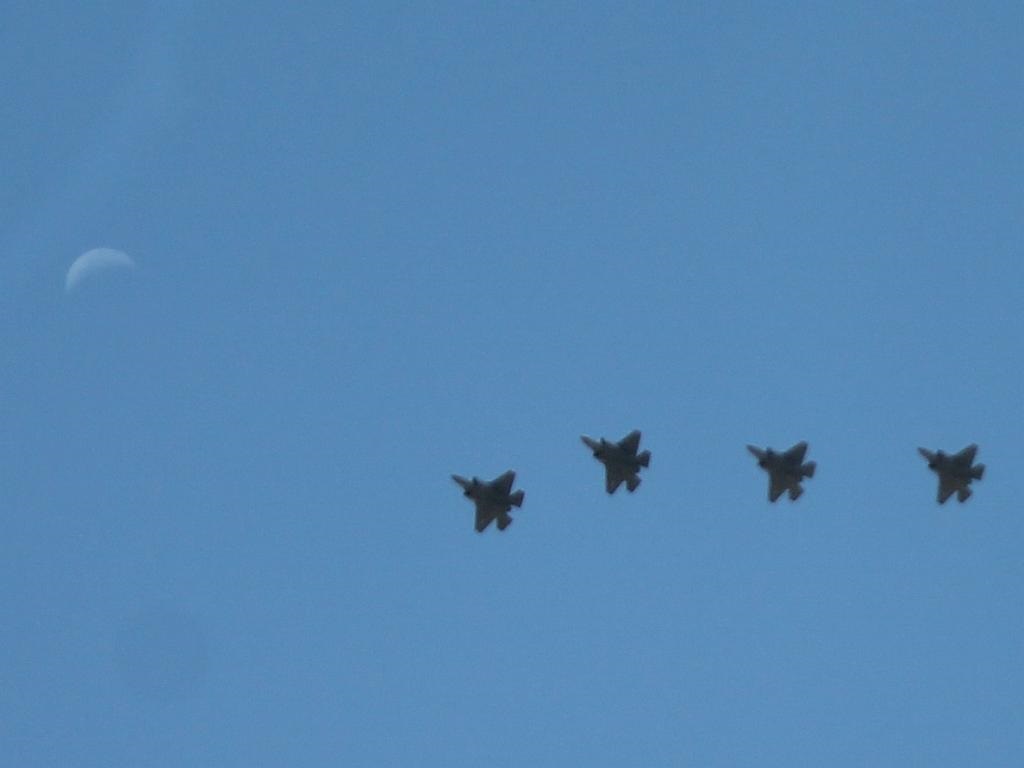 After we dropped the trailer off for service today, we saw these four F-16 Air Force Jet training aircraft forming up for landings at Luke AFB near US60 in Surprise, AZ. It just so happened that when I took this photo through the windshield of Bob’s truck, the Moon was in the frame.

These weren’t the only Air Force jets we saw today; there were a couple of low flying jets over the RV service facility in Surprise and another overflight of two while we were in the parking lot at Walmart.

Here is an overview of Luke AFB from Wikipedia:

Luke AFB is a major training base of the Air Education and Training Command (AETC), training pilots in the F-16 Fighting Falcon. On 31 March 2011 it was announced that the F-35 Lightning II would replace the F-16 as the primary training aircraft at Luke, although the date of deployment of the new aircraft to Luke and reorganization plans were not announced. On 16 July 2013, the Air Force announced that Luke AFB will house a total of 144 F-35A Lightning IIs. 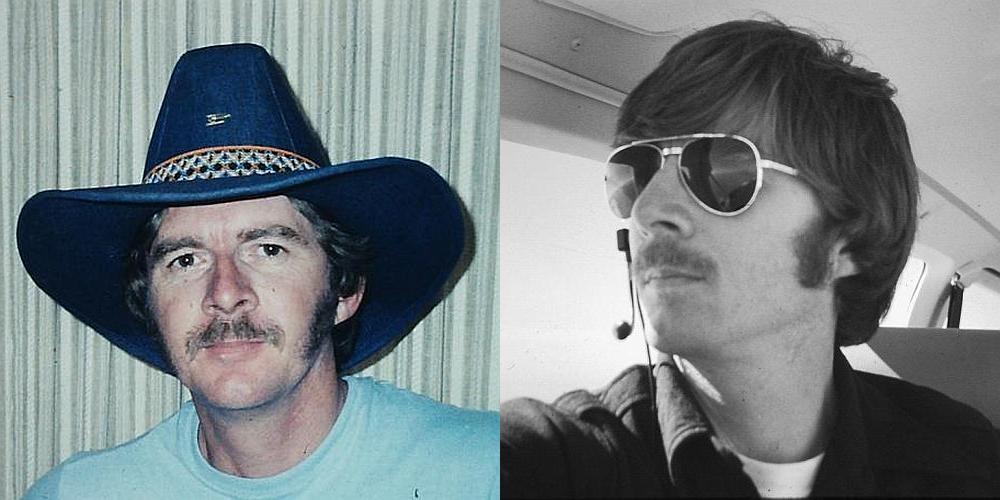 Bob gave me these old photos of him taken thirty-some years ago, so I could send them up to one of the social media sites as a ‘throwback.’ In the image above, the cowboy dude on the left was actually an urban cowboy while John Travolta was still having Saturday Night Fever.

The guy in the right side of the image was acting as pilot in command of one of a fleet of aircraft at the flight school where he instructed and did charter flights. Click on the composite image to enlarge.