We took what is likely our last trip for this year down to the West Valley today to shop at Lowe’s and Walmart in Surprise. The snowbirds are already starting to show up and the traffic down there is bad enough in the summer, let alone when the population doubles in the late fall and winter months. Our population more than doubles here in town, but the traffic and crowds in the stores here are tolerable. I grumble some, but that’s to be expected from an old curmudgeon.

The point of this post is actually to show the electric sneakers Verna picked up in the store. She had socks on her list and they are located by the shoe department. She saw these shoes and liked them for their sturdy appearance and comfortable look. We did not realize until we were back at home that they had rainbow lighted soles.

The shoes each have a battery, a light array around the soles, a control button and a charging jack. The lights can display single or multi colors with billboard motion. The shoes came with a remote control and charging cable that plugs into a charging port. What will the techies think of next? 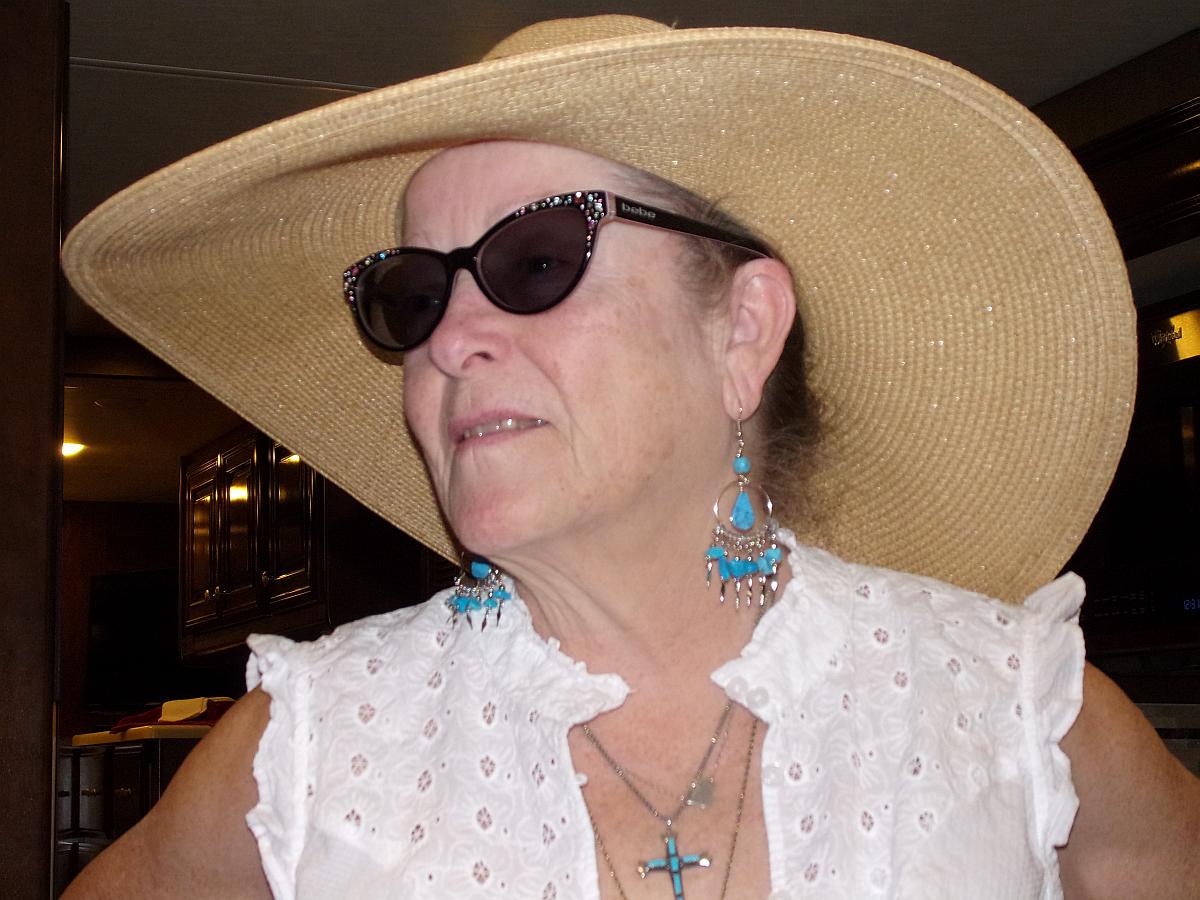 We’re in Hawthorne, Nevada tonight. Verna and I went into the gift shop at the RV park where we’re camped and walked out after purchasing a new hat and a pair of turquoise earrings for her.

Has it really been over a month since we’ve posted here? Been busy with family matters and vacation from retirement. 😉

May 4, 2018 by Bob Apparel Family Photography Retirement Something Shiny 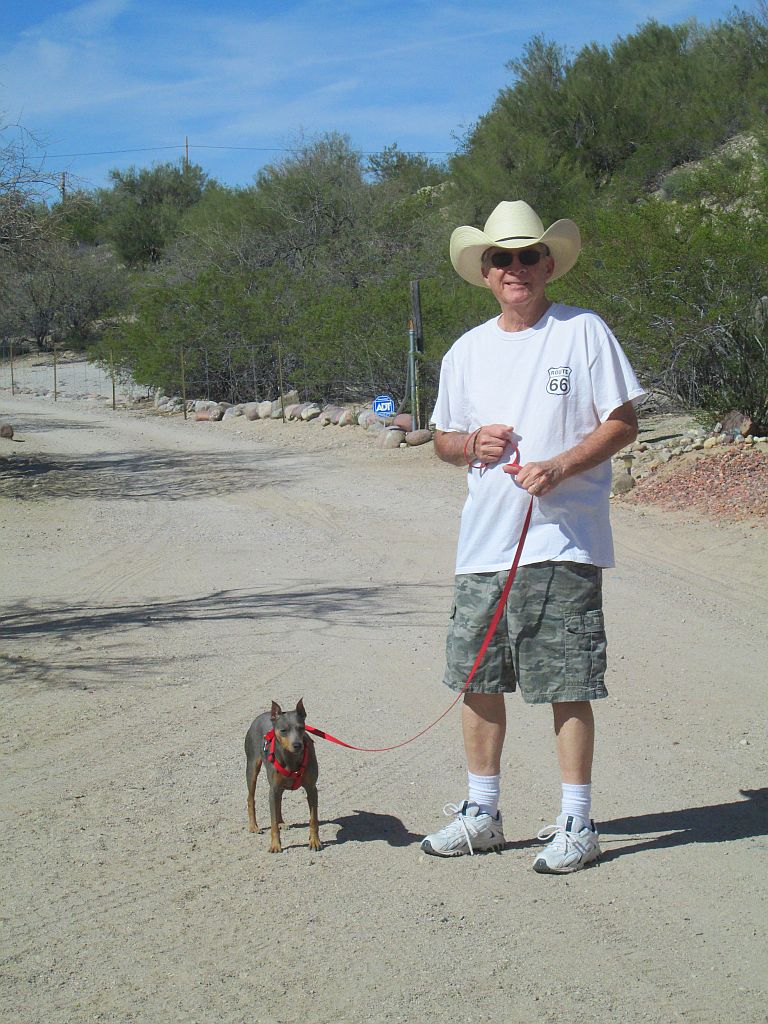 Except for a few days when the weather involved a chance of rain and it was overcast, we have had a delightful January and February (thus far). The forecast calls for more warm days (in the 70’s) for the next week. Tuesday, prior to heading to the doctor down in Litchfield Park, Bob put on his shorts and T-shirt to cope with the few degrees warmer it gets down in the valley.

I took this photo of Bob and Cabela on the road that day. We were taking the dogs for their last run before leaving them “home alone” for the few hours it would take to get down to the valley, have the appointment with the doctor and the drive back home. Fortunately, one of the doctor’s staff told us about the opening of the new SR 303 Loop all the way to the road near the medical plaza. We made good time having avoided the traffic and all the signals on Grand Avenue and Litchfield Road. Click on the image to enlarge.

The best part of the trip to the doctor was having him give Bob a clean bill of health and, after from one more minor procedure on Friday, will relieve us of the constraints that have limited our ability to doing some recreational travel. YAY! 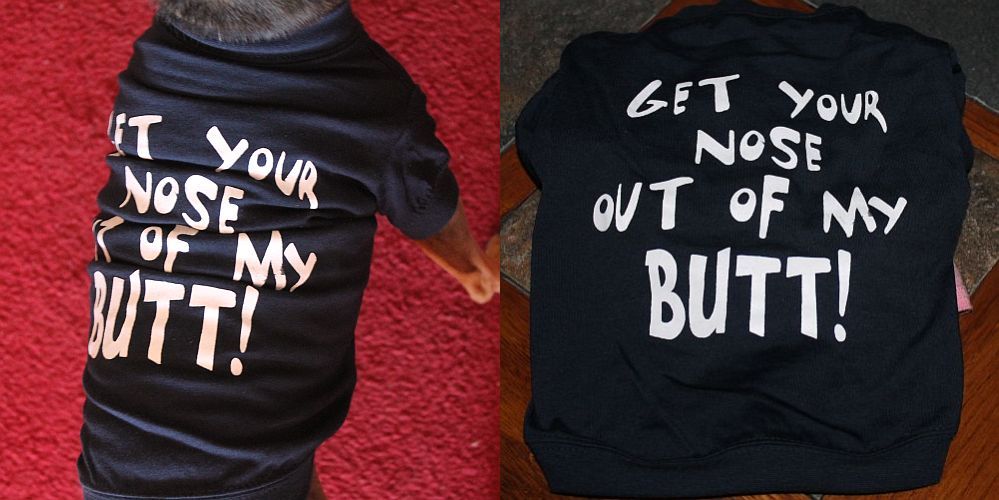 The Mama and Daddy got me this nice T-shirt today. It still is cool at night and since I have very short hair, the shirt keeps me warm. Bay Bay is getting a shirt next week so he can be warm like me. I don’t know what the words say, but the Mama and Daddy think it’s funny and cute like me. Click the picture to make me big. 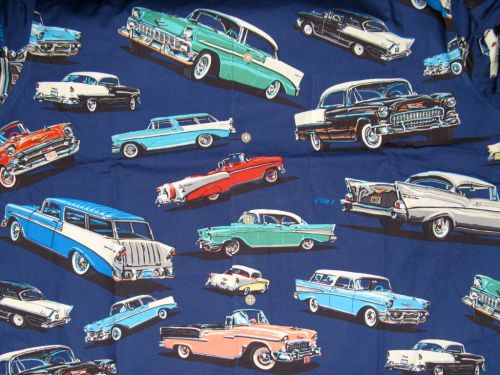 Verna’s Mom, Janie, gave me this beautiful aloha-style shirt for Christmas. I meant to post it last month and now I am finally getting around to it. I love the Spanish Galleon, flowers and ancient maps of the region. Click on the image to enlarge. 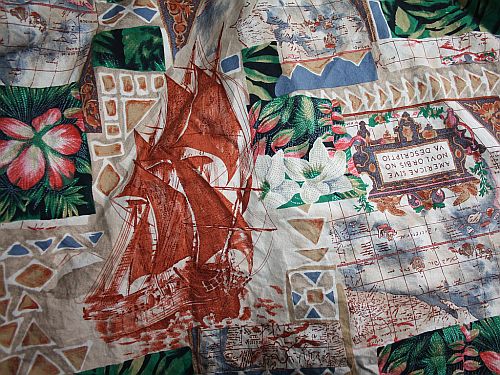